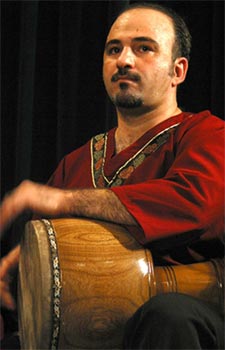 Alireza Piruznia was born in Tehran in 1971. In his childhood he was floating in the rhythms and beats played by his uncle, Mehrdad Arabi, on tombak, so by the age of 12 he started playing tombak with him; afterwards, he continued his practices with Ostad Morteza Ayan in 1986.

In 1996, he started playing Daf with Ardeshir Kamkar, and then continued that with Masood Habibi 1n 1998; meanwhile, his eagerness on Jalil Shahnaz’s playing Tar encouraged him to start playing this musical instrument with Ali Badakhshan and Mansoor Sinaki.

His interest in Naser Farhangfar’s tombak playing led him toward professional playing; besides, he was always fascinated by Ostad Hossein Tehrani’s tombak playing. Also Ostad Amir naser Eftetah’s teaching method was the base of teaching tombak for him.

He acquired his first teaching experiences in his teenage by transferring what he had learned to his classmates and friends. From 1994, he started teaching tombak professionally in some music centres like Pars Music Centre, Bidel Institution, Kelas Saz and some other more. His long years of teaching and playing experience led in establishing the first professional Tombak and Daf training center named Harkat-e-no. He has published some books focusing on Tombak and Daf, the Theory of Rhythm, Teachers’ Training Courses and He has played in Bahar, Nakisa and Mehravar ensembles and established his own ensemble named Harkat-e-no in 2000. The players of Harkat-e-No were and are his students, and this band has played in lots of music halls in Iran such as Andisheh Hall and Roodaki Hall.