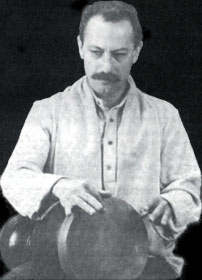 Morteza Ayan was born in Tehran in 1946. He was 12 years old when he began his studies with Ostad Hossein Khorsandi. A year later he started his apprenticeship with one of the most influential masters of tombak, Ostad Amir Nasser Eftetah and within a few short years he was encouraged by his mentor to participate in various radio productions.

After fourteen years of performing, teaching, and developing his personal style on tombak, he was invited by Dr. Dariush Safvat to the Center for Preservation and Dissemination of Traditional Iranian Music. During that time, he collaborated with many masters of traditional music such as Ostad Saied Hormozi and Ostad Yousef Foroutan.

He has appeared with many masters of Persian music and has given numerous concerts all around the world.

this picture is from Syncopation CD By Houman Pourmehdi