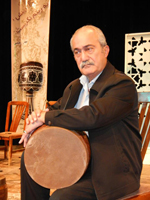 Ostad Bahman Rajabi was born 1939 in Rasht. His interest in musical rhythms started in his childhood by playing on household equipments like metal trays. He moved to Tehran with his family at a very young age. He could not afford a Tombak teacher due to financial difficulties. Therefore, He started learning Tombak by just listing to and observing Tombak players during his schooling. He also faced family and educational problems. These difficulties very much delayed his artistic development.

He considers himself as student of the past and contemporary tombak masters, by learning from past masters and being influenced by contemporary masters. He considers Ostad Amir Naser Eftetah as being more influential.

Bahman Rajabi has renovated and modernized the work of other artists. He has also made some notable innovations in the art of Tombak especially in expansion of playing techniques by using logical methods. He has renovated the traditional Iranian 6/8 rhythms known as "motrebi" or "ruhozi". He has added ten new riz(roll) to the previous five traditional riz(roll).

He is an excellent orator. He has given many lectures accompanied by solo performances about Tombak without expecting any financial reward.

This book is in Persian. A comprehensive study of Rhythm from viewpoint of a master Tombak player.