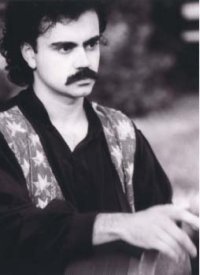 Pejman Hadadi was born in Tehran in 1969.The recipient of the 2001-2002 Durfee Foundation Master Musician Award, Pejman Hadadi began playing tombak at the age of ten under the masters of the instrument Asadollah Hejazi and Ostad Bahman Rajabi. In 1990, upon immigration to the United States, Hadadi began his professional career, performing and recording with ensembles of Persian classical music as well as Indian, Turkish and American musicians.

In 1995, Hadadi joined Dastan Ensemble, one of today's leading "most-forward looking Persian music ensembles" (LA Weekly). With Dastan, he has performed in many important music festivals world-wide and toured extensively in the US, Europe and Iran. Over the years, Hadadi also became acquainted with some of the masters in Persian music and performed with them, both locally and on tour in the US and Europe. These masters include Hossein Alizadeh, Shahram Nazeri, Ostad Hossein Omoumi, Ostad Parisa, Ali Akbar Moradi and Ardeshir Kamkar.

Hadadi has also been the resident composer and performer with a Persian contemporary dance group, Namah Ensemble and has written compositions for dance. He has been a member of Axiom of Choice, a progressive Persian music ensemble in the US and has collaborated among others with percussionists, Adam Rudolph, Greg Ellis and Brad Dutz. He has recorded with Shujaat Husain Khan and performed with masters of Turkish music including Nejati Celik and Halil Karadoumon and the Arab/Israeli oud player Yair Dalal in the US

Pejman Hadadi's modern approach to the traditional tombak lies in his ability to produce melodic patterns within rhythmic structures as well as in his experiments with creating complex variations on the basic sounds of tombak. He also brings to Persian rhythm an Indian percussive sensibility that he has studied over the years. Much of ancient Persian rhythm was later adopted by the Indian musical culture and can be found in their repertoire. Hadadi has a deep interest in uncovering these ancient sources.

Some of Hadadi's recent performances in major international festivals include the Sfinks Festival in Holland, the Lotus Festival in Indianapolis, US, Musica dei Popoli in Italy, Haus Der Kulturen Der Welt in Germany, Bootstrap Creative Emergence and the World Festival of Sacred Music in Los Angeles, San Francisco World Music Festival and the Festival De Saint Florent Le Vieil in France. Hadadi has also performed in The Queen Elizabeth Hall in London, Theatre De La Ville in Paris and more recently, The Getty Museum in LA. Hadadi currently resides in southern California where he teaches Tombak and Daf.

If you are going to any of his concerts make sure that you go twice, once to concentrate and marvel at his ability in inventing new sounds and techniques on Tombak, his ingenuity and creativity, and, once to relax and enjoy his artistic creativity.