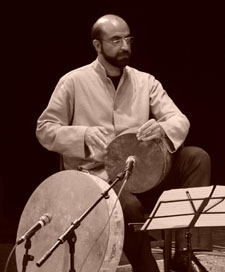 Hamid Ghanbary was born in 1974 in Tehran Iran. He was taught playing Tombak seriously by Ostad Bahman Rajabi a master of Tombak. Dropping out of chemistry college was a turning point in his life. He was determined to continue his education in his beloved subject music. He graduated and he is familiar with playing techniques of various Iranian percussive instruments. He has performed in many concerts. Some of which are as follows:
- Concert with Aftab, Afagh, Mehrpooya, Ava, Mehtab and others bands in Tehran and other cities in Iran with reputable musicians.
- Cooperation with the Tehran Symphony Orchestra conducted by Feridun Naseri.
- Participating in production and preparation of theatre cinema an TV series.

He has published traditional music albums. hamid Ghanbary has provided important assistance in the recording of Koutah, music for collection of percussive instruments, composed by Pedram Khavar-Zamani.

Twilight of the Moon
Composed by Ehsan Zabihifar, sung by Bijan Kamkar

Sing in one cord
for childeren composed by Mohammad Reza Fayaz