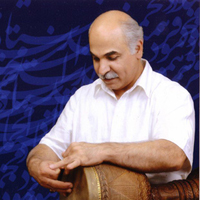 Mahmod Farahmand was born in Tehran, Iran in 1956. He became interested in traditional Iranian music and Tombak at the age of 9. He started his Tomabk training with Ostad Amir Nasser Eftetah in 1968 for two years. He started collaborating with center for preservation and propagation of traditional Iranian music in 1974. He has performed in 3 art festivals in Hafezeye in Shiraz and many concerts in various universities. He joined Molana ensemble in 1980. He has performed in many concerts in Greece, China and Japan

The above biography is from Iranian traditional and modern musicians book and photograph from his facebook page.