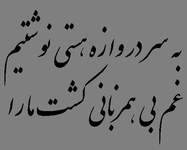 Ostad Nasser Farhangfar was a brilliant poet and calligrapher as well as a great tonbak artist. The above poem is one of the most famous verses composed by him. Maybe it can be translated to:

We wrote at the Gate of the Existence:
The sorrow of not having camaraderie killed us!

This genius of tonbak has added the most favorite style of tonbak playing after the father of modern tonbak, Ostad Hossein Tehrani. Many artists have praised his style. Some of his compositions are more attractive than the melodies, which his tonbak accompanies. Therefore you concentrate on the tonbak involuntary. Here there are some lines in remembrance of this great man.

In 1973 Ostad Farhangfar had some concerts in Belgium. Then in 1975 he moved to New York, because he had been invited by Robert Wilson in order to collaborate with his theater group. He returned to Tehran the same year and started collaborating with Shayda and Aref Ensembles. This collaboration continued until 1984. In 1984 he and Mohammad Reza Lotfi (tar player) had a private recording; believed by many of his students to be the best musical performance of Ostad Farhangfar.

During these 12 years (1972-1984) he created a new style of playing tonbak and attracted many followers. After 1984 he preferred to stay at home and teach his students of tonbak. When someday I asked him: "Ostad why have you stayed at home and why you don't perform in any concerts?" He replied: "My job is done! Now is the time for the young players to flourish." He was young to say farewell to the world of musical performance. Then he recited the following verses of Hafiz:

To him that hath chosen solitude, of the spectacle is what need?
When the street of the Beloved is, of the desert is what need?
Hafiz! End thy verse: for skill itself becometh clear:
Disputation and contention with the pretender is what need?

Here I should mention to a point. In Persian we call him who has chosen solitude, "Khalvat-Gozideh" which is the title of an album, which was produced in 1991 that he performed one of his tonbak solos.

Some days before his demise he phoned my father and said: "I have composed some poems. Do you like me to recite them for you?" After his call my father said to me: "He has composed very nice poems. Maybe someday I will sing them."

May he always be brought happily to mind!