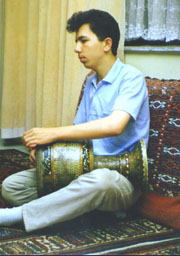 In his family he was acquainted with Azerbaijani and Persian art music. After finishing the Child Music Course with Mr. Mohammad Reza Darvishi (Researcher of Persian regional music), he started learning tonbak at the early age of nine. He was very fortunate to be able to receive his training in tombak under the late Ostad Nasser Farhangfar, in ghawal (Azerbaijani frame drum) under Ostad Latif Tahmasebi, and in theoretical Old Persian music (Ta'lif-e-Negham and Igha') with Prof. Sayyed Abd-Allah Anwar.

Also he has worked on Daf (Kurdish frame drum). For researching on Daf, he has gone to khangah (dervishes temple) of Ostad Mirza Agha Ghosi in Sanandaj, in Kurdistan province of Iran.

These cultural streams have combined with his academic mathematical studies and careful thought to create an outstanding tonbak player.

He has received his Bachelor's and Master's Degrees in pure mathematics in 1997 and 1999. In the second State Student Scientific Olympiad held in 1997, between 2836 participants, he has stood in 12th place in the field of mathematics.

He has been researching the Indian Tabla since 1997.

He began his musical career as a soloist, an accompanist and a teacher when he was 17. He is proud of sharing the stages with his father and the other great musicians..

A Research for Different Names of Tonbak

Tonbak Players of the Past

Daf and other frame drums in Asia, North Africa and East Europe

Styles of Tonbak Playing in Classical Music of Persia

A Brief Introduction to Tabla and Indian Tal-s