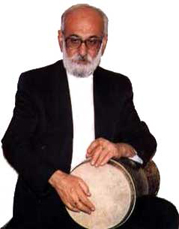 Ostad Mohammad Esmaili was born 1934 in Tehran. He was lead into this field by his own enthusiasm and the encouragement and guidance of his uncles (Morteza Goreenzadeh and Musttappha Goreenzadeh, trumpet and clarinet players)

Ostad Esmaili has composed many Tombak pieces adopted from the melodies of Iranian music and has performed these pieces on several occasions in Tehran's Roodaki Hall, always gaining a very warm reception.

Among his works is a piece called a Tribute to the maestro, played by the Tombak band with other instruments on a recital commemorating the work and the the spirit of Ostad Hossein Tehrani. The melody of the piece is composed by the distinguished Ostad Faramarz Pyvar.

To pay another tribute to the late Ostad Hossein Tehrani Mohammad Esmaili has played all the exercises and group performances contained in Tombak Rudiment Amozeshe Tombak.