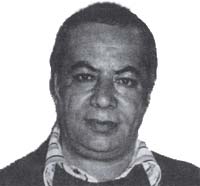 He was invited by Habiolah Badiee to perform in legendry "Golha" program. He became a valuable members of this program. He has introduced and taught Tombak to numerous students. He has performed in many charity concerts with Ostad Hossein Tehrani and Ali Tajvidi. He has performed in many concerts in USA, UK, Germany, Russia, Italy, Japan, Mexico, Afghanistan, Kuwait, Yemen and Saudi Arabia.

The above biography and the photograph are from Iranian traditional and modern musicians book.