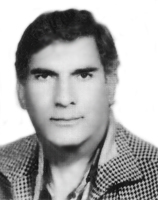 Ostad Ali Rabbani, famous tombak player of the motrebi style, was born in Bagh Ferdos, Tehran, Iran in 1934. He learnt how to play tombak from his father, this makes him a 'chekideh-kar

He started his professional performances as a zarbgir (old expression for tombak player) in Imamzadeh Seyyed Ali Coffee Shop and beside this he performed in wedding ceremonies with the famous motrebi ensembles of that years. Then he was invited to Radio to play tombak and accompanying the famous singers of that time such as Iraj, Sa'aadatmand-e-ghomi, Akbar Mohseni and Mansur Yahaghghi. He played in the Shahla-ye-Shahabad Coffee Shop and this was a good starting point for playing in other famous Coffee Shops of Tehran such as Bagh-e-Golshan, Lughante-ye-Majles, Cacado, Mon-Park, Hotel-e-Jahan, Bastani, Anahita and Cabaret Shokufeh-No.

In these Coffee Shops he has accompanied some famous singers such as Mahvash in Bastani Coffee Shop and Susan in Anahita Coffee Shop.

Not only he plays tombak but also he plays tempo (the Persian goblet drum used for banal songs, similar to the Arabic goblet drum, Darabuka) and the drum set.

He has accompanied the other singers such as Ghasem Jebelli, Manuchehr Shafi'i and Bahram Sir and the Reza Narvan's Motrebi Group.

After the Revolution (1987), he plays in the wedding ceremonies and Kheymeh-Shab-Bazi Theater.

He is one of the most credible masters of the motrebi style of tombak and the Persian humorous poems and rhythmic melodies.

This biography has been provided by Dr. Sasan Fatemi (eminent ethnomusicologist).