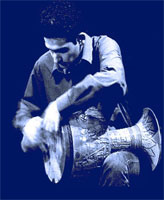 Sina was born in Tehran, Iran in 1983. Sina Khosravi studied the Tombak under the supervision of Daryoosh Eshaghi who is one of the most established, and influential Tombak players in Iran, and has written many method books for the Tombak and Daf. Sina attends the University of Western Ontario where he has also been a guest lecturer for the past 4 years, demonstrating percussion instruments from the Middle East.

In 2004 Sina Khosravi was the runner up in the Western Fair talent contest from the 1500 people who competed. He has done collaborations with U.W.O dance company since 2004. Sina appears on the billboard charting guitarist, Johaness Linstead's CD, Cafe Tropical who is nominated for a juno for the best Instrumental Album Of The Year.Sina is nominated for best world music for the London music awards. he released his first solo percussion CD in April of 2006