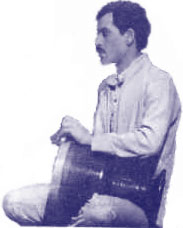 Arjang Kamkar was born in Sanandaj, Iran in 1956.He was borne into a musical family. He started his musical training from an early age with his father Ostad Hasan Kamkar. He started with Santoor and drum set and finally chose Tombak.

He joined Sanandaj orchestra under leadership of his father. he then joined regional art and cultural orchestra Farhang va Honar and collaborated with this orchestra until 1975. He then moved to Tehran and studied art at University of Art. He joined Sheyda ensemble under leadership of Ostad Mohamad Reza Lotfi at Iranian national radio. He believes that his playing has been greatly influenced and advanced since joining the Sheyda ensemble.

His main profession is painting.

The above biography and the photograph are from Iranian traditional and modern musicians book.