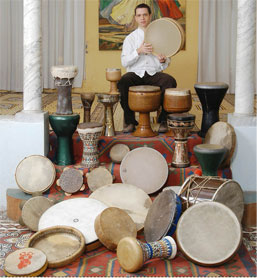 Kobi Hagoel was born in Israel in 1962. He studied acting in Nisan Nativ a private school of acting. He has acted in many plays and has performed in 2500 shows.

He started learning darbuka the middle eastern goblet from an early age. He has studied with many old musicians in Israel and he is well versed with many different style and techniques used by percussionists in middle east specially in Egypt, Turkey and Iran.

He studied tombak, daf, dahul and cymbals with Frivar Dilshadhafar who comes from an old Iranian tombak playing and instrument making family. His tombak technique is influenced by Ostad Mohammad Esmaili and Ostad Jamsid Chemirani.

He has written a book about near east rhythms, which, is the result of his 11 years of research into the subject and contains about 300 rhythms.

He is player/composer member of the east west ensemble, Esfahan ensemble and Kav Hattefer.

Kobi Hagoel resides in Israel where he teaches percussion privately and in schools.