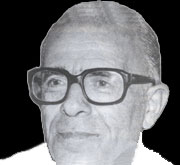 Hosain Hamedanian was born in Tehran, Iran in 1923. He first studied tombak with traditional tombak players and he was greatly influenced by their jovial techniques. He also studied modern techniques with Ostad Hosain Tehrani.

He started his professional career in 1941 by accompanying instrumentalists in their live and recording performances.

He started collaborating with legendary Golha program in 1956.

He was a taraneh (a form of rhythmic Persian vocal music) composer-performer (taraneh-khan). He has composed the two most popular Iranian tunes: Baba-Karam and Ey-Yar-Mobarak-Bada.

He has performed in many charity concerts with Iranian national radio orchestras.

The above photograph is from Iranian traditional and modern musicians book.